The whole school day ended up being utter crap after the car journey this morning. I sit in the café next to the cliffs where the house is and stir the strawberry milkshake in front of me, watching the sprinkles dissolve into the sugary mixture. The whole shop has a bohemian vibe, as in dream catchers hanging from the ceiling and eccentric people in baggy clothing, the whole place bright—not just colourful but backdropped with kitsch windows that overlook the sea.

The ocean where Charlie disappeared.

I sip the foamy pink mixture and maybe it's a sudden surge of sugar that makes every vein and vessel in my body spark, or maybe it's a just the good idea that pops into my head. A dangerous idea, of course; but it's still a good idea, and that's all that matters.

Heading down to the nearby beach I, untie Charlie’s boat. and check the time: 17.33. School ended over two hours and Mum must be worrying; after all, I haven’t even been home yet. The shore drags towards my shoes and invites me in. I follow—I hate the sea, but I hate a lot of things in life, like school and the toxic friends that I still have to face every day. The sea is soft and forgiving while I’m balanced on the boat. The air is strong, salty and bitter but also soft, and I feel somehow safely cradled by its zephyr.

I scan the seas to find the spot where Charlie died and open the letter I found this morning.

Inside are coordinates, just coordinates. Then the boat begins to drift gently. I reach for the oars either side to try and gain control but the grip on whatever is pulling the boat gets tighter; snatching the oars from my dampened hands and tossing them away; I see them bobbing about in the frothy water. As II sit in the boat and wait until it stops I check the coordinates: they are exactly what is stated on the letter.

Suddenly I hear a terrible groaning coming from behind.


Note that the copyright of all writing reproduced on this site, and on the Minuteman 365 and Vibe sites, remains with the authors, including finished work, drafts and outlines.

They twirl and merge:
‘We could look the sun in its face
and dare it to rise in the morning;
we could beg for rain to soak our bones’.
They sway as one in an eternal dance
unbroken by death's disgruntled stare.

From 'Danse Macabre' by Elicia Welch, featured in the Firebird Press anthology, Resurgence. 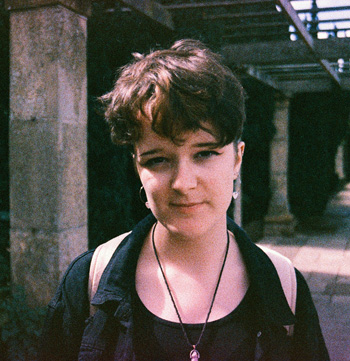 Elicia is currently studying for a degree in Psychology, and in her spare time enjoys writing, She mostly writes poetry but can be hi9hly effective as in composing short stories. She enjoys sharing her work on Instagram, creating poetry magazines and contributing articles to an online indie publication.

Her themes are often drawn from problems in relationship and mental issues, and she hopes in the future to develop creative writing as a tool in helping those affected by these all too prevalent conditions

More writing from Elicia (in pdf format) can be found below:

'Words from the Coast'